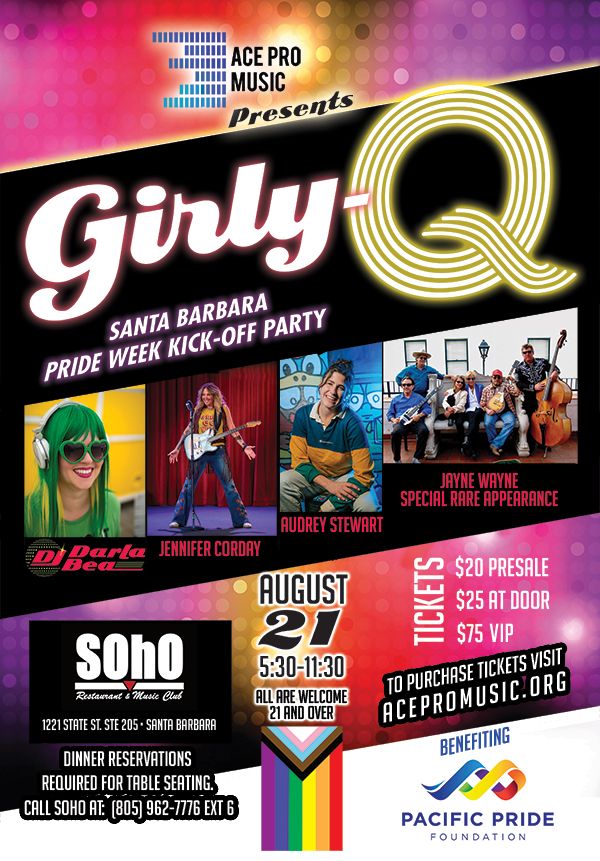 Audrey Stewart, originally from Indianapolis Indiana, is a stand-up comedian/actress based in Los Angeles, California. She has been accepted into several festivals including the Laughing Skull Festival. Audrey’s ADHD style comedy has captured the attention of many allowing her stand-up clips to accumulate millions of views across all social media platforms. Audrey has been heard on “Netflix is a Joke Radio”, seen on the NBC Series “Bring the Funny” , The Drew Barrymore Show, and the Facebook Watch series “Fuzzballs”.

Jennifer Corday is an Out-And-Proud award-winning singer/songwriter/guitarist and cellist with star quality and incredible charisma!  A native of Long Beach, CA, Corday has over five studio albums and 20 awards under her belt. Corday just released her playful gay pride anthem, PINK CLOUD.  The SolarCity Remix was produced by Scott Anderson and is available now on Spotify and through her website.  She is a true influencer, building a global brand for lesbians everywhere. Corday has shared stages with Melissa Etheridge, Sarah McLaughlin, Joan Jett, Pat Benatar, The B-52s, Cyndi Lauper and many more. You may have heard Corday's original music in MTV documentaries and numerous movie soundtracks, or seen her as an actor in acclaimed lesbian films including the newly released Michelle Ehlen production Maybe Someday. Corday has built a large and loyal following of life-long fans in SoCal and around the world with her storytelling and crowd sing-alongs. Whether performing her own material or busting out cover tunes in her own unique way, Corday's engaging performance style gets people on their feet and leaves them wanting more.  Join the Corday Crew by texting JOIN to 833-4-CORDAY and check out her site for new music and show dates at corday.net.

Winner of the “Best Event DJ in Santa Barbara” Award for 6 consecutive years in a row by locals! DJ Darla Bea has won countless awards for her tireless work with wedding ceremonies and receptions. Darla is born and raised in Santa Barbara, a UCSB Graduate and a Weekly On-Air Radio Personality. She has been DJ’ing and MC’ing Corporate Events, Parties, Children’s Events, Festivals and Parades for 15 years. DJ Darla Bea has also worked exclusively with the Pacific Pride Foundation as an ally and a music curator for their many LGBTQ Mixers, Proud Proms, Drag Queen Brunches etc. since 2016.