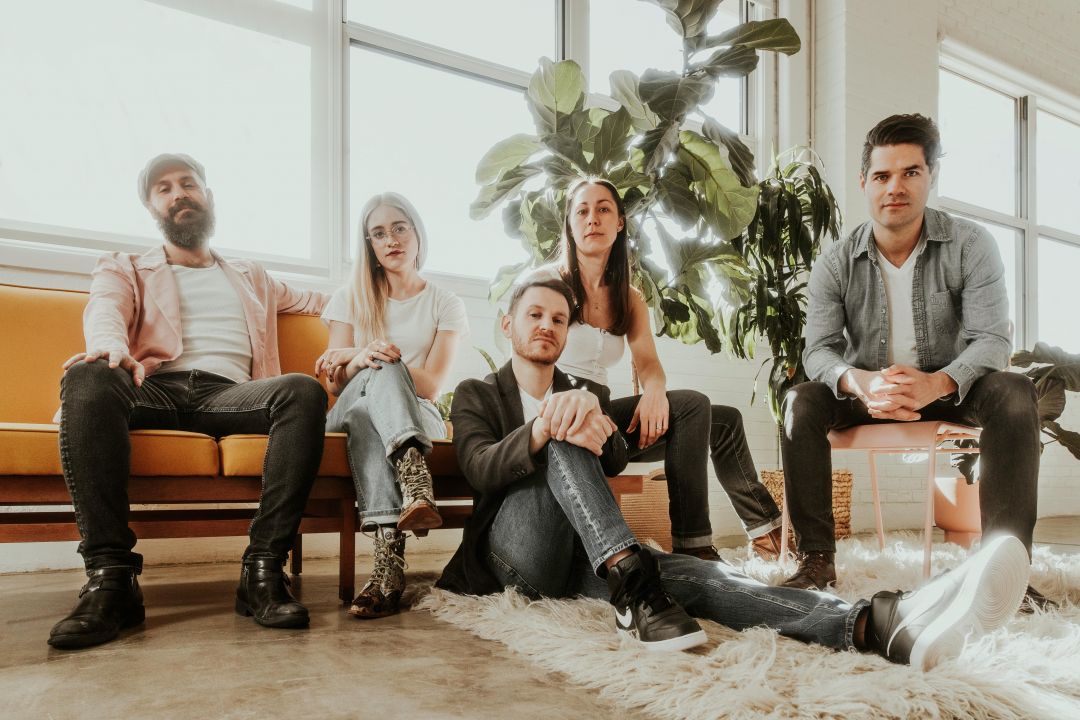 “I think of this album like a bunch of abstract paintings,” says Ghost Light’s Tom Hamilton. “We present the songs as a series meant to be experienced in a certain order, but at the end of the day, whatever that series makes you feel is totally up to you.”

In that sense, Ghost Light’s brilliant debut album, ‘Best Kept Secrets,’ functions much like the band itself, drawing beauty and strength from both its complementary pairings and its unexpected juxtapositions. Formed in 2017, the group brings together five consummately talented artists from across the musical spectrum—guitarists/singers Tom Hamilton and Raina Mullen, pianist Holly Bowling, bassist Dan Africano, and drummer Scotty Zwang—and thrusts them into a wholly new context. The result is a record that transcends the sonic contributions and background of any single member, a collection that’s at once gritty and refined, sprawling and restrained, straightforward and psychedelic.

“When we started this band, all I wanted to do was make the most original sounding music we could possibly come up with,” says Mullen. “Everyone’s tastes and histories were so different from each other that I was really excited to see where the five of us could go as a group.”

Hamilton and Mullen began writing the core of the album in the spring of 2017, focusing solely on instrumental arrangements at first as they chased new sounds and experiences with a little bit of chemical assistance.

“We wanted to see what would happen if we opened up some new creative doors, so we got a whole bunch of LSD,” remembers Hamilton with a laugh. “Twice a week for a few months, Raina and I would eat acid and just work in the studio all night.”

The songs they wrote during those sessions were epic and immersive, influenced by a broad array of stimuli from the tense American political atmosphere to classic cinema. They drew on seemingly incongruous influences ("What would it sound like if Sufjan Stevens made a Soundgarden album?") and composed with a filmmakers’ eye, scoring the dynamic scenes in their heads with vivid detail and deep emotion. While many of the tracks would ultimately end up being fleshed out with lyrics, several tunes remained fixed as instrumentals even on the finished album.

“I wanted to approach creating our own world the way a director would,” explains Hamilton. “Most of the songs have lyrics and those are sort of like the dialogue in a film, but in between those moments, you have these instrumental tracks, which are like long, lingering landscape shots. Those are just as important to telling the story because they’re all about context and understanding your surroundings.”

One at a time, the rest of the band began visiting Hamilton and Mullen to delve into the process of fleshing out those early demos. Lyons and Zwang developed bass and drum parts, respectively, and Bowling brought some of her own compositions to the table in addition to contributing keyboard arrangements. The process of artistic cross-pollination proved to be a rich one, and it helped break new ground for all involved.

“It was kind of like working with a new medium or a new palette of paints and starting to figure out how the medium works and what it can do,” explains Bowling. “Our understanding of each other as musicians and what we each bring to the band was falling into place at the same time each of these songs were taking shape.”

With a vision for the album coming into focus, the band headed into the studio in the fall to begin official recording sessions, working out of a 4,000 square foot former Chrysler factory in Philadelphia. The sessions marked the first time all five members had ever been in the same room together, and they leaned into the spontaneity of it, setting up in a large circle to record everything live.

“We were chasing something perfectly imperfect,” explains Mullen. “I’ve always believed that the imperfections in any recording are what make it real.”

“You look at the classic recordings that stand the test of time, and they’re all about the band,” adds Hamilton, who produced ‘Best Kept Secrets.’ “It’s that human element that makes you feel what you feel when you’re listening. There’s a vibe and a mojo you can only get from musicians being present in the moment, creating together and reacting to each other.”

The record opens with the eerie “Elegy,” a scene-setting instrumental tune that experiments with classical guitars and orchestral production underneath a haunting, wordless melody. It’s a bold way to begin an album in this oversaturated age of digital streaming and diminished attention spans, but that’s what makes it such an ideal introduction into the ambitious world of Ghost Light. The music commands your concentration and swallows you whole. The rousing “Don’t Come Apart Just Yet, My Dear” twists and turns through unexpected changes as it flirts with arena-ready classic rock before giving way to Allman Brothers guitarmonies, while the stirring “Diamond Eyes” hints at Fleetwod Mac with its infectious chorus, and the intricate blend of traditional and progressive on “Isosceles” traffics in shades of Fairport Convention. Songs often find Hamilton and Mullen trading off verses only to come together on the chorus, offering up multiple perspectives within the same track.

“We wanted to embrace that duality,” explains Hamilton. “We’d cut our vocal takes at the same time in the same room so we could feed off of each other’s energy.”

That devotion to reading each other’s energy is central to the band’s identity. While much of their album is laser focused and airtight, the group’s live shows are a far looser affair, with songs frequently blossoming into extended improvisational journeys dictated by the emotional temperature of the room on any given night. Performances turn into wordless conversations between all five members, a tide-like give-and-take that makes each show wholly engrossing and utterly unique.

“An album is…a document and snapshot of a particular moment in time,” Hamilton told Live For Live Music in a recent interview, “but when it comes to taking that album and bringing it into the live arena, that’s when we turn ourselves back into the improvisers that we all are. We get to really see what these songs can do and where they can go and how they can change and grow…We just want to get out there and try to do something beautiful and interesting every night.”