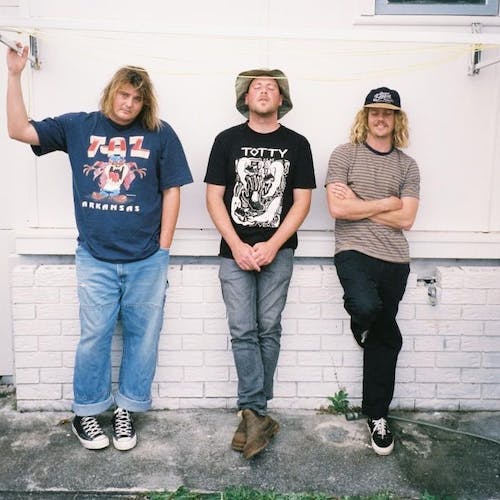 Skegss are an Australian 3 piece powerhouse originally from Byron Bay formed in 2013. Combining surf, garage, and slacker elements to create their dynamic sound, Benny Reed (Guitar and vocals), Toby Cregan (Bass and vocals), and Jonny Lani (Drums), work effortlessly to provide melody, simplicity and energy into a few short minutes. Skegss have released several extended plays and their debut full length, My Own Mess, which hit the national Australian charts at number 2.

The band's first single release was back in 2014 ("L.S.D") and gained favourable reviews around the country. Touring commenced shortly after around Australia and even managed to take the band overseas to the United States for shows in New York and Los Angeles.

Shortly after a series of releases between 2015 and 2017 gained the band attention not only around the country, but around the world. Sold out UK and US tours ensued as Skegss reputation only gained higher praise. Their live shows are sweaty, singalong dance parties for all ages, showing how easily the band connects with all walks of life.

With over 9 million views on YouTube, 490k listeners on Spotify and almost 150k followers collectively on Facebook and Instagram, it goes to show how the band's ability to craft songs that resonate with their listeners has projected them to not only best loved live and festival band, but also recorded favourites.

Having notable success with their debut album, the band has also received the Triple J feature album, #11 and #71 in the Triple J hottest 100 in 2018. Skegss's hard working ethos has also seen them play main stages at Australia’s biggest music festivals including Splendour in the Grass, Laneway Festival, Spilt Milk and Groovin the Moo to name a few.