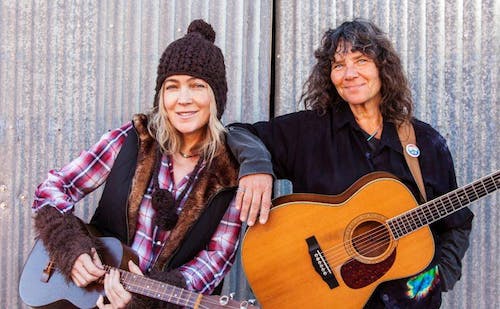 The Listening Room at SOhO

This is a seated show with tables in our stage room. Please purchase tickets online or call our box office (805)-962-7776 to make reservations!

After carving a career out of what some might call the shadows, guitarist Nina Gerber is at last beginning to dare the light. Her first album as a leader, Not Before Noon follows two decades which brought her to prominence without ever placing her name on the front of an album cover.

Since her accompaniment of Kate Wolf first earned her recognition, her acute skills as performer, producer and arranger have continued to deepen. Her contributions to acoustic music have earned her a following as loyal as for the numerous high talents she has accompanied. Nina has a unique ability to completely free herself within an eclectic range of styles. Presented with folk, country, bluegrass, rock, or blues, she is able to fall into leads which have rare reverence for the true feeling of a song, always emphasizing taste over technical display. She seeks to express through her hands, rather than gain attention, and it is this integrity which makes her expressions worth intent listening.

That kind of intent listening will reveal Nina's melodic touch in more places than many realize. Nina has performed and/or recorded with: Karla Bonoff, Peter Rowan, Eliza Gilkyson, Nanci Griffith, Greg Brown, Lucy Kaplansky, MollieO'Brien, Rosalie Sorrels, Laurie Lewis, and many others. Her soulful enhancement of their music easily explains why several return the favor by appearing on Not Before Noon and Ninas live cd, Good Music with Good People.

That qualities of honest heart inform Nina's music should be of no surprise, given Kate Wolf's initial influence and inspiration. It was Kate's heart and honesty which inspired Nina to realize music as her calling. After seeing Kate perform in 1975 at a pizza parlor in Sebastopol, California - Nina's home town - Nina dared to set working with Kate as a specific goal, and by 1978, the goal was accomplished. Nina came to be an essential part of Kate's music, as she grew into being her accompanist and close musical companion. It was a partnership which lasted until Kate's passing in 1986, and in its effect, has lasted long beyond that.

Whether it's on her own "solo" CDs - collaborations with some of the folk world's finest - or producing, arranging, or performing with countless others, Nina continues to prove with her guitar that some of the truest and most emotional communication requires no words. Still, when combined with the voice of another musician of heart, the result is affecting in an unforgettable way.

"Nina's guitar style is wide and brave. As she glides thru this record project, she uses each of her guitars as if it's the one she was born to play. Acoustic or electric, she sounds beautiful, smokey, precise, full of the licks you love to hear.

A career that began nearly two decades ago as a teen-aged lead singer for one of California's best know regional acts (Mumbo Gumbo), Chris Webster boasts a successful resume highlighted by four solo releases (Drive, Now Playing, Something in the Water, My Name is Christine) and one amazing traditional Bluegrass/Americana recording (The Webster's "10,000 Miles) with her sister Cassie and renowned guitarist Scott Nygaard. More importantly, she brings a pedigree rivaled by few. With astonishing power and passion, her voice reaches magical heights, yet effortlessly turns on a dime to deliver gut wrenching torch songs and gentle ballads. Combining elegance and grace with a foot-shuffling manner, Webster has a purity and beauty about her that is seldom seen and never forgotten. She can cut to the bone with tender, unrequited songs of love-gone-wrong then slap you upside the head with a fistful of lyrics and a take-charge melody that makes you step aside, stand back, and listen.

You can turn the wine to water, but you can't make me drink. You can ask me nicely, and I'll tell you what I think. You can sit real close with your hand on my leg. But before you touch that wheel, make no mistake...I'm driving, I'm driving.