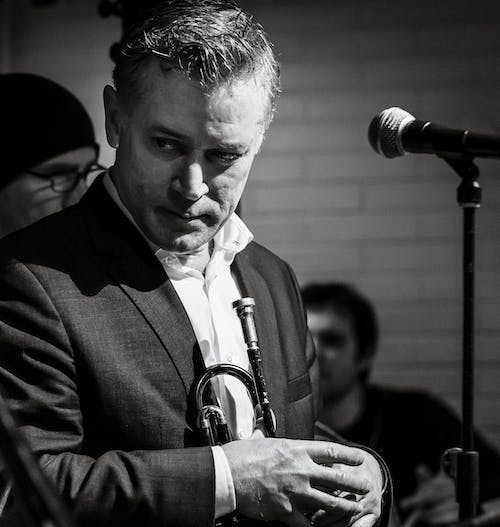 This is a seated show with tables in our stage room. Dinner purchase is required for table seating. To make reservations, please purchase tickets online or call our box office at (805)-962-7776.

Nate Birkey's quiet but intense demeanor typifies an artist restlessly pursuing the evolution of his own musical personality. As composer, trumpeter and vocalist, he imbues warmth and broiling energy into his music.

The NYC-based musician has built a solid reputation for creating a modernizing “mainstream” musical voice, steeped in subtle swing and expressive lyricism which has earned comparisons to Miles Davis and Chet Baker.

He steps into some terrain both new and old by offering fresh yet traditional approaches to the realm of gospel music and spirituals on his latest album Just a Closer Walk. This isn’t the first time Birkey has followed a particular conceptual path on an album: he focused his musical attentions on earlier albums with the deceptively simple, self-descriptive titles, 2001’s “Ballads” and 2008’s “Christmas". Alongside the pulse of “straight ahead” jazz in the foundation of Birkey’s approach, his taste for New Orleans, Latin, Country and other genres can also be heard on 1998’s "Indelibly You", as well as "The Mennonite" (2001), "Shortest Day" (2004) and "Almost Home" (2008). Birkey has released nine albums, the last seven of which are on the California-based Household Ink Records.

The Nate Birkey Quintet has performed internationally including tours of Russia, Italy, France, Canada, and throughout the United States. His music has been featured in numerous films including the 2015 documentary, Grasshopper For Grandpa. He is also one of several musicians featured in a book by Cicily Janus titled The New Face of Jazz, published by Random House Inc.. Released in July 2010, it is an intimate look at today's living legends and the artists of tomorrow.

A Colorado native, Nate attended Berklee College of Music in Boston, Seattle Pacific University, and the University of California in Santa Barbara, where he remained based for many years after. An eastward move to New York City in 2005 broadened his horizons and deepened both his artistic resolve and his musical evolution.

Whether performing his own compositions, jazz classics, hymns, spirituals, country or pop tunes, Birkey steadfastly holds his quintet together with thoughtful arrangements that instill a sense of wonder as to what's coming next.

A fluid improviser and vocalist of understated grace, Birkey has an engaging way with a song. His sound is poised and assured, powerfully stark and spare - it creates an atmosphere at once solitary and electric.