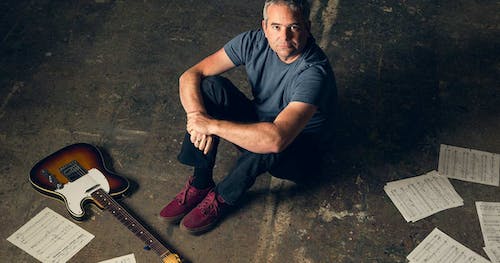 This show will be in our lounge area. Tickets are $5 (only available at the door) and seating is first come first serve!

Dan Zimmerman decided to devote his life to playing guitar when he was seven years old. One of his friends put Kiss’s new album, Love Gun, on the turn table, and the guitar had him hooked. Dan’s list of favorite guitar players soon expanded well beyond Ace Frehley: John Scofield, Eddie Van Halen and Joe Pass were some of his favorites. After playing in high school rock bands, he studied classical guitar at UC Santa Barbara and jazz at Berklee College of Music in Boston. At UCSB Dan played in Evil Farmer, a rock/jam band known for spontaneous, creative and sometimes disastrous improvisations. They shared the bill at festivals and clubs with many other bands, including ALO who Dan sometimes guests with to this day.

Dan has played guitar professionally in Santa Barbara for more than 20 years. He has performed and recorded with numerous bands on the south coast including Raw Silk, Spencer the Gardner, Roy Galloway---backup singer for Marvin Gaye--- and the internationally renowned Latin Jazz artists Teka and Luis Munoz. Playing in these different settings has given Dan an appreciation for many styles of music. He brings a Jazz musician’s enthusiasm for improvisation to the excitement of rock and the friendly openness of blues and folk.